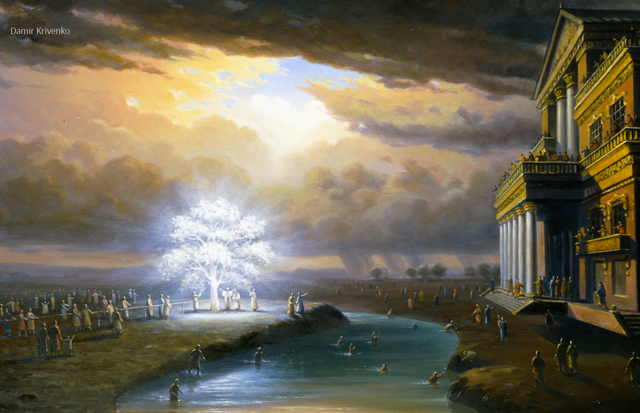 By Becky Craven, Second Counselor in the Young Women General Presidency |  Ensign May 2019

I remember teaching the youth some years ago about boundaries and the importance of the commandments given to us by the Lord.  One of the questions they asked me was, “How far can we go before it becomes improper…or a sin?”  We were speaking about morality that day.  I really had to think about the question before I answered it.

When I went home that afternoon, I pondered that question even more and hoped that my answer to them satisfied them.  I thought about the invisible line between right and wrong…about what is proper and improper.  Then I asked myself, “why would I want to venture off the path…even just a little…if my destination is straight ahead?”  Just something to think about as you read the following article.  ~Emilia Julian

As the influences of the world increasingly embrace the evil, we must strive with all diligence to stay firmly on the path that leads us safely to our Savior.

I once saw a sign in a store window that said, “Happiness, $15.00.” I was so curious to know how much happiness I could buy for $15 that I went inside to see. What I found was a lot of cheap trinkets and souvenirs—not one thing I saw could possibly bring me the type of happiness that the sign implied! Over the years, I’ve thought many times about that sign and how easy it can be to look for happiness in items that are cheap or temporary. As members of The Church of Jesus Christ of Latter-day Saints, we are blessed to know how and where true happiness is found. It is found in carefully living the gospel established by our Lord and Savior, Jesus Christ, and in striving to become more like Him.

We have a dear friend who was a train engineer. One day while he was driving a train on his route, he spotted a car stopped on the track ahead of him. He quickly realized that the car was stuck and unable to cross the track. He immediately put the train in emergency mode, which engaged the brakes on each boxcar that extended three-quarters of a mile (1.2 km) behind the engine, carrying a load of 6,500 tons (5,900 metric tons). There was no physical chance that the train would be able to stop before it hit the car, which it did. Fortunately for the people in the car, they heard the warning of the train whistle and escaped from the car before the impact. As the engineer spoke with the investigating police officer, an angry woman approached them. She shouted that she had seen the whole incident and then testified that the engineer did not even try to swerve out of the way to miss the car!

Obviously, if the engineer had been able to swerve and leave the tracks to avoid an accident, he and his entire train would have been lost in a derailment and the train’s forward progress would have come to an abrupt stop. Fortunately for him, the rails of the tracks on which his train ran kept the wheels of the train snugly moving toward its destination regardless of the obstacle in his way. Fortunately for us, we too are on a track, a covenant path we committed to when we were baptized as members of The Church of Jesus Christ of Latter-day Saints. Although we may encounter occasional obstacles along the way, this path will keep us moving toward our prized eternal destination if we stay firmly on it.

The vision of the tree of life shows us how the effects of casualness can lead us away from the covenant path. Consider that the rod of iron and the strait and narrow path, or the covenant path, led directly to the tree of life, where all the blessings provided by our Savior and His Atonement are available to the faithful. Also seen in the vision was a river of water representing the filthiness of the world. The scriptures describe that this river “ran along” the path yet passed only “near” the tree, not to it. The world is laden with distractions that can deceive even the elect, causing them to be casual in living their covenants—thus leading them near the tree, but not to it. If we are not careful in living our covenants with exactness, our casual efforts may eventually lead us into forbidden paths or to join with those who have already entered the great and spacious building. If not careful, we may even drown in the depths of a filthy river.

There is a careful way and a casual way to do everything, including living the gospel. As we consider our commitment to the Savior, are we careful or casual? Because of our mortal nature, don’t we sometimes rationalize our behavior, at times referring to our actions as being in the gray, or mixing good with something that’s not so good? Anytime we say, “however,” “except,” or “but” when it applies to following the counsel of our prophet leaders or living the gospel carefully, we are in fact saying, “That counsel does not apply to me.” We can rationalize all we want, but the fact is, there is not a right way to do the wrong thing!

To read the remainder of the article click on ChurchofJesusChrist.org